Something to think about:

I am not sure where to begin.  Do I write about finding the lump in my breast in 1992?  Or the various treatments I have undertaken since that year, with pretty good results?  Perhaps sometime, I will explore each treatment, the various doctors, situations, and explore why something worked and why other somethings didn't work.  For sure God has been with me and worked good health into my life.  Answered prayers is at the top of the list.

For now, I will write about the current situation.  I have sent emails to family and friends with these paragraphs:

In August 2017, I was diagnosed with peritoneal carcinomatosis, which means metastatic tumors in the abdomen area, particularly the omentum.  This is the elastic sack/lining that holds all the organs in place.  Cancer is nothing new for me.  Over the years, I have had much metastatic disease, in the liver, bones, lymph nodes, brain, that my doctors have treated with various drugs and cyberknife radiation.  Prayer groups have had me on their lists for these diseases and I know God has helped to change the diagnosis, time and time again.  I’ve added in some alternative treatments, such as Reiki, the Hoxey tonic, or diets, usually under the care of Dr. Lofgren (naturopath in Mesquite, TX, who has retired).  Who knows what worked, but each time, the disease retreated or slowly crept to another place.
This time the disease seems more serious, because of its location.  Eventually, if the tumors don’t recede, they will grow into the organs themselves, and/or take up all available space in the abdomen and take over my life. They have kind of done that already!  I’ve tried several drug protocols this fall and winter and nothing has worked thus far.  Soon, I will begin again a combination of Faslodex and Abemaciclib, with hope that the two drugs will have some effect on the tumors. The side effects of these drugs are supposed to be tolerable, but for me, any side effects are difficult.
To update with current wonderings:
Some days the energy I need is there, other days not so much.  Why?
Some foods are easier to digest than others.  Why?
What is happening to the tumors as I add a Noni juice compress to my abdomen each night?  They seem to settle down, but are they going away?
How will the drugs affect me?  Will there be side effects?  I pray NOT!
Well, just call me the pestering woman, who calls out to God night and day, HEAL ME!
Drug protocols, April 15, 2018
For those interested in drug protocols, the drugs of choice November through February were Gemzar and Carboplatin.  (Let me say right now, that I may or may not spell the names correctly.)  I survived the drugs, but only with the help of many other drugs:  tylenol, naproxin, tramadol, anti-nausea drug, and others.  My journal entries of late 2017 describe my futility in planning my week - which days would I have energy and which ones not.   I kept trying to find a pattern!  I did have two blood transfusions and also some injections of Granix which boosted white blood cells in the bone marrow, and caused GREAT pain in my legs.  Which meant I needed other drugs for that pain.  What a circle of drugs and pain and drugs and pain.
The upshot of the protocol was that the two drugs did nothing to make the tumors recede or go away.  Probably was my imagination, but I felt there was a war going on in my abdomen and the big question was who would win?
After Dr. Young pulled Gemzar and Carboplatin - btw, I never lost my hair, even though I was supposed to and bought a cute wig in anticipation - she decided that Faslodex and Abemaciclib would possibly work.  Faslodex is an injection in each hip every two weeks and Abemaciclib is a morning and evening dose in pill form.  The combination of these drugs and all the others listed above created a storm of nausea and vomitting for me and dehydration. I could not eat and was miserable.  So I stopped taking the doses during my spring break until I could feel normal again.
But, I am scheduled to begin again later this week.  I'm trying to have a positive approach to this protocol.  Praying constantly as well - the pestering woman calls out to God, HEAL ME! 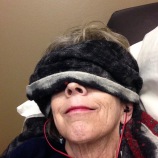 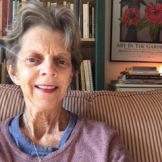 For me, whenever my blood pressure dips low, the fluid saline solution hydrates my body and gives me more pep. I have done this several times and wish it could just be standard operating procedure.  I am looking into the electrolye water, to see if if also will hydrate.  I have been told over and over to drink more water and as much as do drink, I still have dry mouth and low blood pressure.

Another excellent way to boost my energy is receiving a blood transfusion.  I didn't know about cross checking the blood sample until now.  This process takes blood gathered prior to the actual transfusion.  My blood is drawn, then sent to all the holding tanks of blood.  When the right, exact match is found, then the blood is ready to be infused.  Usually takes 24 hours before I begin to feel the energy of the new blood.  Whoever you are out there, donating blood, thank you!

I've been given Grannix, to boost blood marrow cell activity.  I can't say I like it.  My bones ached dreadfully after each injection.

I am curious about other ways to boost all blood counts.  Dave's niece Allie is working in cancer reserach and I think this is one of her topice.  Go Allie!